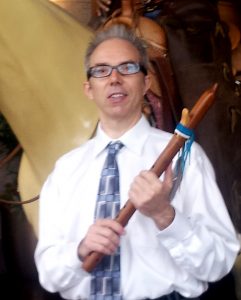 John Patrick Funk is a Mixed Media Artist who transplanted from Austin Texas to the village of Pilar New Mexico in 2012. John had been pursuing his love for music and art inspired by the nature and beauty of New Mexico where he took up seasonal residence in this inspiring location at the mouth of the Rio Grande Gorge Orrilla Verde Nation Monument through 2018. His Enchanted Lands Soundscapes are his musical and artistic diaries of New Mexico which features 6 volumes of original music, photography and multiple series of mixed media works including unique Spirit Light Sculptures made with Cholla cactus skeletons.

John has performed at Dozens of venues in Northern New Mexico including the Historic Taos Inn, Taos Mesa Brewing Co. and Kit Carson Park being featured in the “Taos News” for his Enchanted Lands Soundscape Music events. In 2016 John had taken on professional work in the Pilar village becoming a staff photographer for Southern Exposure Photography in the White Water rafting industry and a year later becoming a certified rafting guide on the Rio Grande. The time and experiences made a indelible mark that had a tremendous impact not only on the music but in life- in opening a new paradigm and love for our natural treasures and understanding the deep relationship we all share with our Mother Earth.

John also has been involved with many groups including “The Robot Group” in Austin Texas since the 90’s, has won awards, been published in magazines and featured on TV for his robotic inventions, props and LED light sculptures. He has been a participant and guest speaker at Science Fiction conventions, SXSW events and more recently the Maker Faire community. John hopes to continue his Enchanted Lands adventures and produce music & art in beautiful places all over the world.